More of America’s businesses are choosing to install solar than ever before. Walmart once again took the top spot among America’s businesses in the electric generation capacity of its solar investments and number of solar projects. The big box retailer, based in Bentonville, Ark., boasts a robust 142 megawatts (MW) of solar photovoltaic (PV) capacity and has completed 348 installations.

Many more of the country’s most recognizable and best-run companies continue to expand their use of solar energy. IKEA and Costco are powering stores with solar. FedEx distribution centers are powered by solar. Apple and Verizon data centers are powered by solar. The headquarters and offices of Mortenson Construction, L’Oreal, the Better Business Bureau and Forever 21 also rely on solar. Auto manufacturers such as General Motors, Ford, Toyota and Volkswagen use solar energy, and so do manufacturers such as Owens Corning, Intel, and Johnson & Johnson. Across industries, America’s business leaders are choosing solar to cut costs, help their bottom line and plan for the future.

While this report highlights the ever-expanding list of companies choosing to go solar, it also calls attention to the many ways in which America’s companies are choosing to use solar to meet their business goals.  While solar has long been viewed as an environmentally responsible energy choice, businesses now deploy solar because it is a smart fiscal choice as well. In doing so, these companies have proven the viability of solar technology, showing that it is ready now to provide low-cost power generation on an increasingly large scale. With the right policies in place, solar will continue to play a crucial role in moving America’s economy forward. 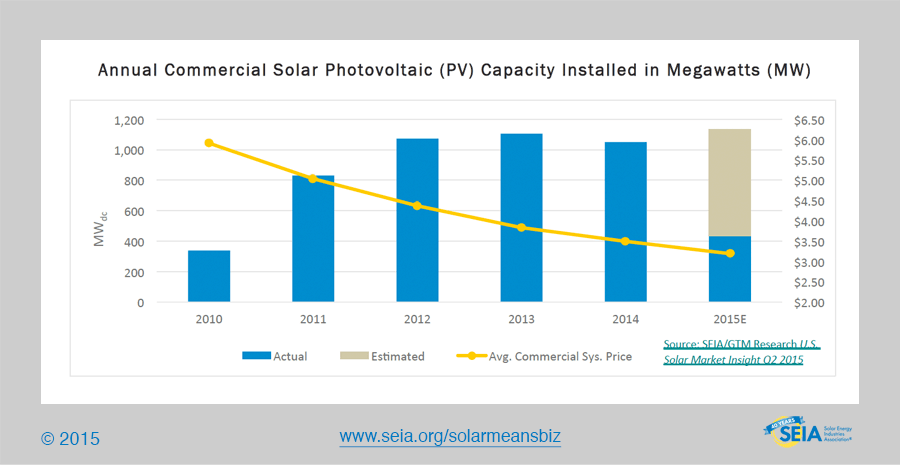 From manufacturers to retailers, to tech companies, real estate agencies and financiers, more U.S. businesses are reducing costs by taking advantage of the sharp decline in the cost of solar. Growth in corporate solar adoption has not been limited to traditional solar markets in California, Arizona and New Jersey- this year’s report finds installations in states like Arkansas, Kansas and Indiana. It is increasingly apparent that solar is a smart business decision wherever your business may be.

The growth in solar adoption by America’s business community represents just one piece of the broad-based growth in solar installations we’ve seen in the United States over the last decade.  Spurred by investments in solar made at the residential, commercial and utility-scale level, installed solar capacity in the U.S is 30 times greater today than it was in 2006.  By the end of 2015, there will be enough solar electricity generated in the U.S. to power more than 5.5 million homes.

This fourth edition of Solar Means Business surveyed some of America’s largest companies as well as a number of additional businesses with known solar portfolios. The increased solar adoption by major corporations shown in this report reflects the overall growth within the broader commercial sector, but more importantly shows that companies that previously installed solar are continuing to add more of it. Companies sampled here installed 1,686 systems totaling 907 MW, generating enough electricity to power more than 158,000 homes. This represents a 59% increase over the findings of last year’s report. While this dataset cannot be considered a comprehensive look, it does provide insight into the diversity of companies that are choosing to go solar.

In 2015, Solar Means Business tracked projects in 3 new states, expanding to Arkansas, Kansas and Indiana. In total, the data in this report represents solar powered businesses in 37 states, as well as Puerto Rico and the District of Columbia. 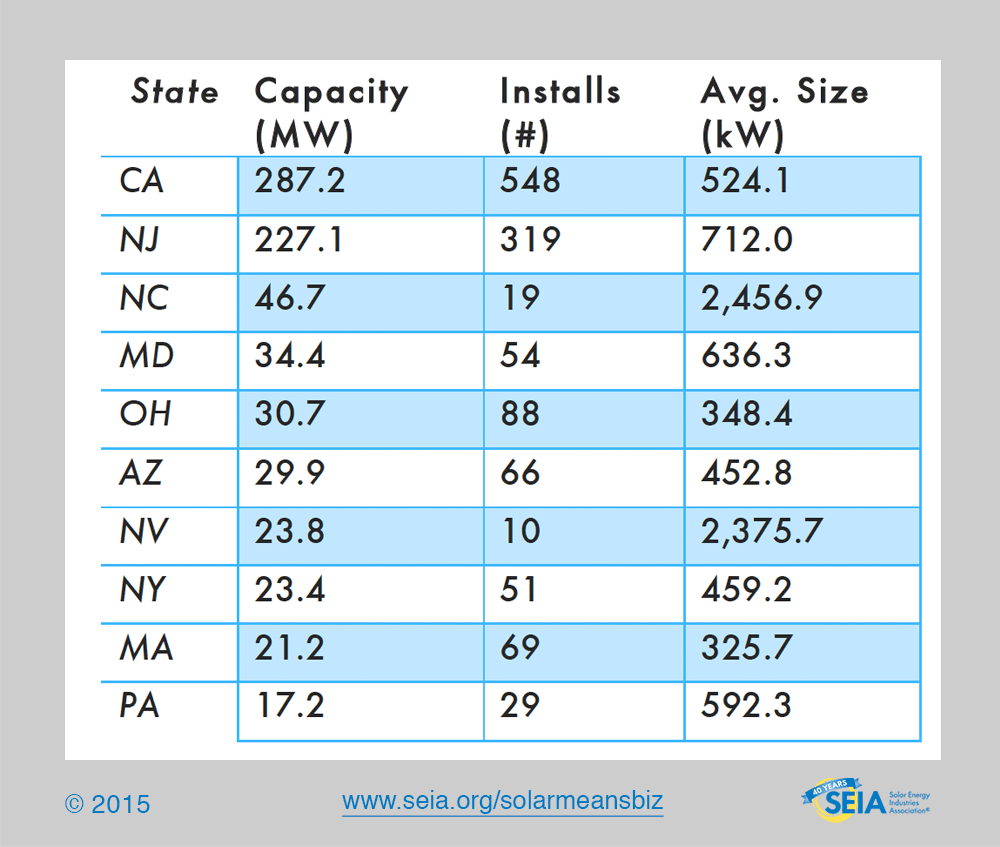 IKEA is the company with the most geographically expansive solar fleet, with solar powered stores in 22 different states, but companies like Kohl’s, Whole Foods, General Motors, Target and 15 other leading companies have solar at their facilities in 5 or more states.

Click on the map below to view the projects covered in this report. 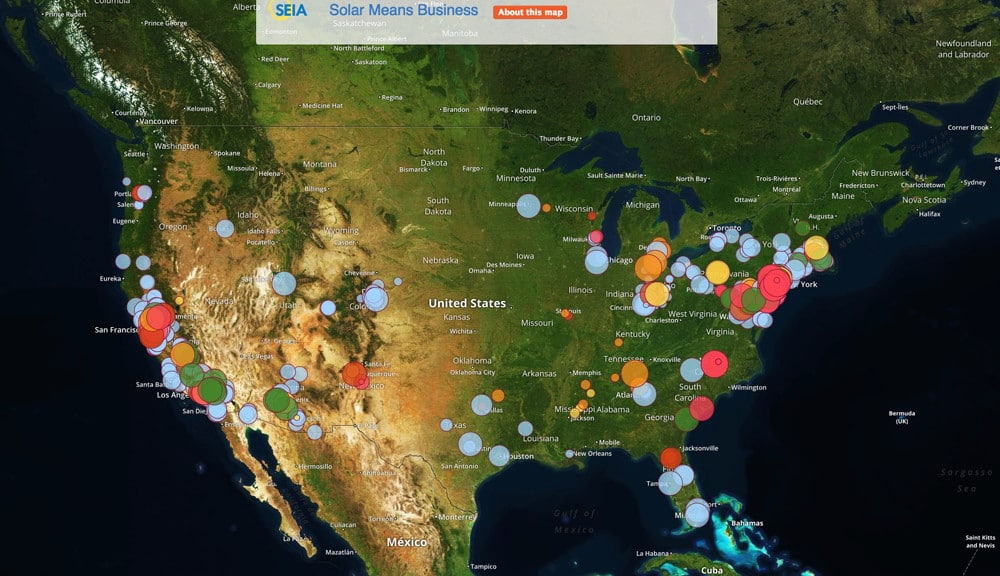 The Top 25 Companies by Solar Capacity

Many of America’s largest companies have led the way in solar deployment and have done so at an amazing rate. The list below ranks businesses by their total on-site installed solar capacity, or the maximum power potential measured in megawatts. 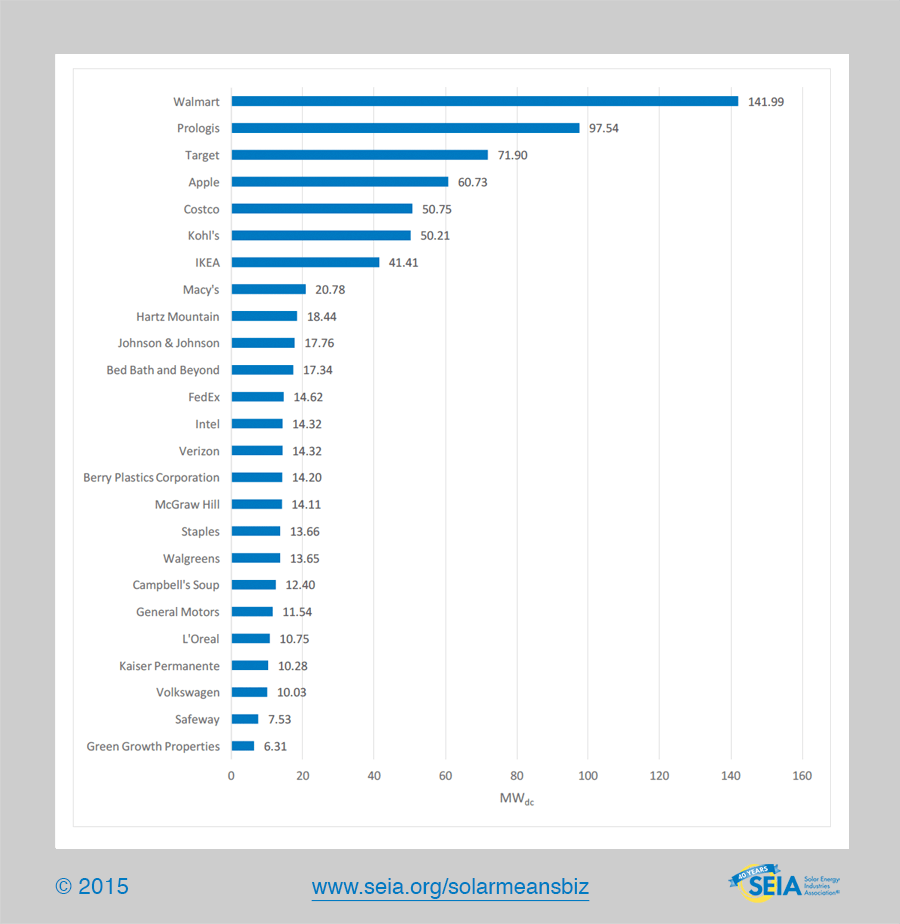 The Top 25 Companies by Number of Installations

The list below ranks businesses by the number of on-site solar PV installations. The Top 25 companies have installed more than 1,462 individual systems, a clear sign that solar meets a range of energy needs for a variety of different companies throughout the US. 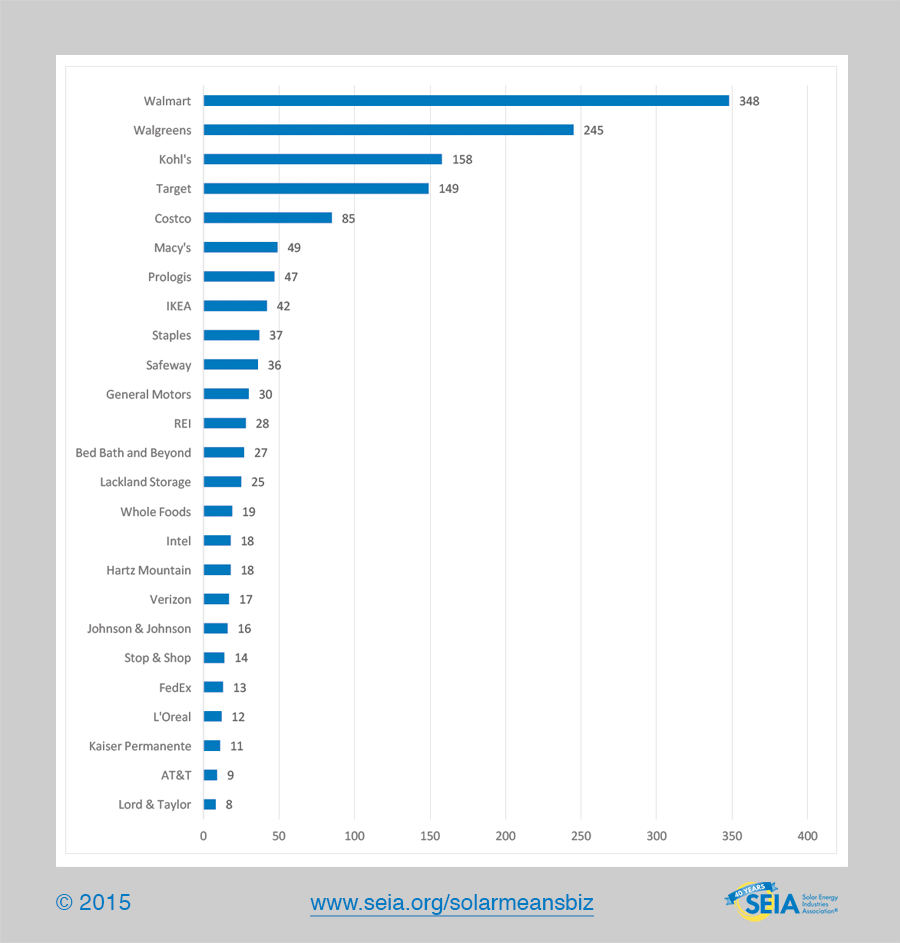 The companies covered in this report use solar in many different ways. With falling costs, more opportunities have become available for smart businesses to take advantage of this clean technology. From carports to ground mounts to rooftop arrays, solar is a flexible energy solution for our nation’s savviest companies.

The overwhelming majority of projects in this listing are roof-mounted systems, constituting 445 MW of PV capacity and representing more than 90% of the systems within our dataset. These systems frequently can be scaled most cost-effectively, making them attractive to companies with a wide array of building footprints.  Available roof space can be a limiting factor to system size, resulting in the lowest average system size of the three mounting types discussed in this report.

As evidenced by the average system size, ground mounted systems are typically larger installations that companies with higher levels of electricity such as GM, L’Oreal, and Verizon use to power their manufacturing and data centers. While they number only 4% of projects, they represent more than 15% of all PV capacity within our dataset.

This sector, in particular, appears to be growing rapidly in terms of both number of installations and average system size. 42 of the 67 carport projects in our dataset have been installed since 2012, with the average system size of these projects moving from 600 kW through 2012 to 790 kW since 2013. Walmart has been a driver of this growth, with 10 carports in Arizona, 12 in California and 1 in New Mexico within the past 3 years.  Intel, Johnson & Johnson, AT&T, GM and Verizon have all also installed carport systems in recent years.

Companies are powering their offices, headquarters and corporate campuses with solar. This sector represents 72 MW of the total 850 MW tracked in this report. System sizes range from Mortenson Construction’s 20 kW array on their headquarters in Minneapolis to the 5.1 MW array covering Forever 21’s headquarters in Los Angeles. 92 of the 1,580 systems in this dataset are office buildings that have gone solar with an average system size of 782 kW.

From large retailers to small, America’s companies are going solar. The retail sector itself is comprised of many different businesses and facility types. Large retailers have seen perhaps the most consistent and steady growth over the years as they typically have a similar building structure, which allows them to make large solar installation deals for multiple locations throughout the country. These companies include grocery chains such as Whole Foods and Safeway as well as department stores like Macy’s, Lord & Taylor and JC Penney.

With more than 1,000 projects within this dataset identifying as a retail location, this is easily the largest single sector that has begun adopting solar. These projects combine for a total of 397 MW and range from 4.4 kW to a 1.63 MW array atop the IKEA in Round Rock, TX. Walmart continues to lead both in this sector and overall with 104 MW of capacity at 348 locations. From 2007 through 2010, Walmart installed 40 systems with an average size of 503 kW. In 2011, Walmart’s adoption of solar has only accelerated as we saw 59 installations in 2011 and 75 installations in 2015. Walmart’s leaders clearly recognize the value solar brings to their business.

Companies such as, IKEA, Costco, and Target typically have stores with large square footage and a great deal of unutilized roof space. This allows these companies to build arrays similar in size to some large utility scale projects.

Walgreens is also a growth leader in this space, achieving this through the installation of smaller systems across a large number of their retail facilities. While Walgreens average system size is a bit smaller, they have installed 85 systems at their retail locations this year alone, more than any other company in this list. Walgreens is setting the pace for going solar.

Manufacturing represents 86 MW across 67 installations within this report, making the average system size 1.3 MW. These are large systems relative to others in the commercial solar sector and they need to be to power the manufacturing facilities of companies like L’Oreal, GM, and Johnson & Johnson.

Data centers are some of the most power hungry facilities and companies such as Verizon, Apple and Amazon have chosen solar energy to meet those needs. Apple is a pioneer in this area with its pair of large 20 MW plants near their data centers in North Carolina and another 20 MW that recently came online in Nevada. The tech giant also recently announced a partnership to power its state of the art headquarters in Cupertino with 130 MW of solar. Amazon, similarly, has announced plans for an 80 MW plant in Maryland. In contrast to these extremely large projects, Verizon’s needs are more dispersed as it has installed more than 7.9 MW at its data centers and mobile switching centers in New Jersey, Maryland, California, Massachusetts and Hawaii.

Similar to manufacturing facilities, these facilities often take advantage of the vast and unutilized roof space that results in comparatively large system sizes. Projects covered in this category range from less than 100 kW to more than 8.6 MW, with an overall average system size of 1.5 MW. In total, this dataset tracks 131 projects at distribution centers with more than 196 MW of solar PV cap­acity. Since last year’s report, Walmart, FedEx, Walgreen’s, Prologis, Hartz Mountain and Gap have installed a total of 16 projects with a combined 19.5 MW of capacity. Companies that have already gone solar continue to do so, but overall this space is still underserved relative to its market potential.

Built for exhibitions and the thousands that attend them, Convention Centers are characterized by massive floor space, massive roof space and massive electricity consumption. The Anaheim Convention Center in California, for example, has 815,000 square feet of exhibit space.[1] It also has a 2.4 MW roof mounted PV system that was completed in late 2014 and covers 300,000 square feet of rooftop.[2] The Meadowlands Convention Center and Hartz Mountain helped to pioneer solar on conference centers with the 412 kW array on the Meadowlands Convention Center in 2009. Mandalay Bay Resort and Casino has a massive 6.4 MW rooftop array, which is the result of a recent 2 MW expansion.

This is the fourth edition of the Solar Means Business report. Originally produced in collaboration with Vote Solar, researchers attempted to contact representatives of allFortune 100 companies and a number of additional businesses known to have significant solar portfolios while also combing public databases to collect data. While every effort was made to collect complete and accurate data, not every company responded to our data requests and, similarly, public databases do not capture all commercial installations. Ultimately, SEIA believes this is an accurate portrayal of the leading commercial users of solar energy in the United States as of November 2015.

In previous versions of this report, solar assets on properties owned and maintained by Real Estate Investment Trusts (REITs) or other real estate firms where the building occupants did not directly consume the electricity from the PV systems were excluded from this report. In this year’s edition, we included systems located on buildings even when those systems supplied wholesale power to the local utility and its customers in light of the fact that these companies are putting their existing buildings to use as solar power plants.

While some companies purchase solar renewable energy credits (SRECs) from solar power generated off-site, this report does not consider such transactions due to limitations in data collection and verification. Likewise, SRECs are produced by many on-site PV systems and are sold to utilities or other buyers. While companies that sell their SRECs do not retain the environmental attributes of the system, such systems are still counted in this report. Regardless of a company’s decision to retain or sell credits, the decision to deploy an on-site solar installation is an essential step in solar market deployment.