Big Corporations Are Starting to Ditch Their Power Providers. A Sign of the Utility Death Spiral?

Xcel plans transition from coal to solar, wind, gas and storage in Colorado

Wind and solar in March accounted for 10% of U.S. electricity generation for first time

Electricity generation from wind and solar follows seasonal patterns that reflect the seasonal availability of wind and sunshine. Within the United States, wind patterns vary based on geography. For example, wind-powered generating units in Texas, Oklahoma, and nearby states often have their highest output in spring months, while wind-powered generators in California are more likely to have their highest output in summer months.

Monthly solar output is highest in the summer months, regardless of location, because of the greater number of daylight hours. About half of all utility-scale solar power plants in the United States use some form of sun-tracking technology to improve their seasonal output.

In almost all states, wind makes up a larger share of the state’s total electricity generation than solar. Among the top dozen states, only California and Arizona had more solar generation than wind in 2016. Three states in the top 12—Iowa, Kansas, and North Dakota—had no generation from utility-scale solar plants in 2016 and relatively little output from small-scale solar photovoltaic systems. 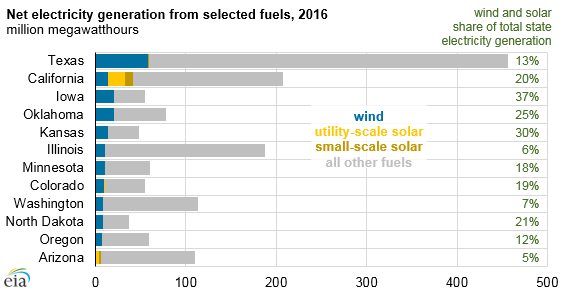